Home » Blues on the Green 2 – Interview With Angela Strehli 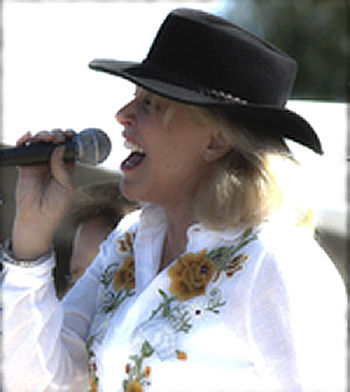 Capital Public Radio and Swell-Productions presents Blues on the Green 2 on September 26, 2010. Featured performers will be The Blues Broads and The Nick Gravenites Band with emcee Mick Martin. Tickets for the much anticipated event can be purchased at The Beat and Dimple Records locations and if the event is not sold out you can also purchase tickets at the gates.

One of the Blues Broads, Angela Strehli, sometimes known as the “First Lady of Texas Blues” took time out of her busy schedule to answer some questions. After a couple of rehearsals, on the morning of the interview, she indicated her voice might be going out. As luck would have it her voice held up and she answered all questions.

The Sacramento Press: How was the name chosen and who came up with the name Blues Broads?

Angela Strehli: I did. Broad can be interpreted in different ways. It does not mean girl. It’s more like a female with a little attitude. It’s a female who’s had life experience. It just fits into our music which is mostly blues with some gospel.

SP: When did you interest in music begin?

AS: I’ve been interested in music all my life. I’m a big fan of all kinds of music.

SP: Have you been touring or recording lately?

AS: Haven’t done much touring lately. It takes up quite a bit of time to come up with original songs and to put a record together. I’d like to end up with a record that I can be proud of and maybe tour to share that with our fans. There are a few places we’ve played. Playing overseas in Europe and Japan is a bit different. They know and appreciate the blues so it’s exciting to tour over there.

SP: Being from Texas do you think this early influence is still a big part of your musical background?

AS: Yes the Texas roots have had quite an influence on my music. I grew up listening to every type of music from western, blues, swing and everything in between. There was a wonderful mix of musical tastes in Texas. I was exposed to wonderful music from Mexico and nearby Louisiana; Texas was a hotbed for music and I learned a lot from all the different types of music. This was wonderful and at the same time it made it a challenge to meet the standards set by some of these musicians.

SP: Do you have any current projects in the works?

AS: Blue Highway was the last one. I’m just enjoying time with the Blues Broads. I’ve been putting some tunes down but don’t’ feel they’re yet worthy of a record. I’d like to put something together that I can be proud of and comes across like I’ve put the time and effort into it.

SP: Do you play any instruments?

AS: I play the bass and a little harmonica. I used to really enjoy playing bass when I first started and was later “tricked” into being a singer. As it worked out I’ve been doing vocals ever since.

SP: Is this your only gig in Sacramento? Have you played here before?

AS: I’ve played a few times here but not recently.

SP: You’ve collaborated with many artists, are you currently in any projects with any of them?

AS: I’ve done guest vocals on several projects with Marcia Ball and Lou Ann Barton. I’ve enjoyed working with Maria Muldaur and Paul Horn. These types of collaborations are lots of fun.

SP: Are there any artists you wanted to work with but haven’t had a chance?

AS: No but I’m really excited about the Blues Broads. We all have our individual styles and influences. We’ve combined all these styles together and enjoy putting them all together. On shows, we all take turns singing while the others complement with backup vocals. We’ve been able to put on shows at Rancho Nicasio and the Roadhouse.

SP: I also read that you studied Argentinean folk music and spent time in South America.

AS: I was lucky that my dad was into old folk music. We spent some time in Mexico where he had a musician friend. We would visit and we learned some songs in Spanish. The Mexican music influence developed with these experiences. My mom is from Puerto Rico and my grandparents have some roots in Spain. They had 6 or 7 children and for a time they were all in Panama working at the Panama Canal. The kids went to school there in the middle of the jungle. My mom loved it, it was a great experience.

SP: Do you still have family in Texas or have they made the move to California?

AS: I have a daughter there and so I go there to visit her and the grandchildren. I was just there also to celebrate Antone’s 35th anniversary. I was very pleased with the event and got a chance to reminisce.

SP: How would you compare your early career to where you are now?

AS: Well, when I first started people thought we were crazy for not doing (playing) what white middle class kids did. People asked “what do you think you’re doing? Why aren’t you doing rock and roll?" We just loved the blues and wanted to learn all about it. This became a passion and if it wasn’t for the encouragement of the masters, such as Muddy Waters, it may have been different. Their support made a difference at a time when blues seemed to have lost its drawing power. At the time it seemed that the younger generation of blacks was not interested in blues. Blues did not seem to be drawing young talent. You know kids don’t want to listen to the same music their parents do. So this is where we all come in and music unites us. In blues we draw from within. We extract those intense feelings and humor that draws us to the blues. But you know it all worked out the music generation keeps evolving and going back to its roots.

SP: I think this is all I have; I want to thank you for your patience and granting this interview. Before I let you go is there anything else you’d like to add?

AS: If you really enjoy music don’t give up in your quest. Persevere if you love it. Keep going on your own level don’t try to be something you’re not. Just have the patience to continue. It takes a long time to become a professional. Sometimes you may not be enjoying or you’re having a hard time so you draw from these experiences. Doing this type of art sometimes you don’t have enough to live on but you have to keep at it. It’s gotta be real if you’re going to sing (the blues). When things are hard you have to make that extra effort, the love of music will prevail.

Angela Strehli has been a key figure in the blues music scene and has worked with many artists such as Muddy Waters, Stevie Ray Vaughan and Maria Muldaur amongst others. Angela was instrumental in keeping the Austin Texas blues alive and helped propel the scene into the international musical market. During the interview she indicated that she’s noticed Sacramento has a rich blues venue and is looking forward to the concert on Sunday.

Play, Putt & Prizes Await at the “Midtown Mini” on September 24

Play, Putt & Prizes Await at the “Midtown Mini” on September 24

Photo of the Week

Photo of the Week

Submit Your Own Photo! >>